George Perdikis – Cypriot Parliamentarian
“Geoengineering”/clandestine spraying
The resistance from European citizens:
From the municipal council of Aegina to the European Parliament 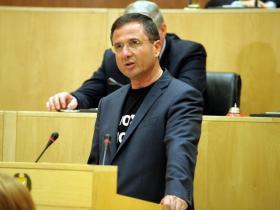 On Sunday 8th June 2014, under the auspices of the municipality of Aegina in Greece, the parliamentarian of the Cyprus Greens George Perdikis spoke in Aegina on the taboo subject of the clandestine “chemtrails” spraying.

It should be noted that while ever more academic specialists make public statements in support of the idea of spraying the planet’s skies with sulphates or with aluminium or other toxic metals, allegedly as a measure of mitigating climate change, discussion around the view that such spraying is already in implementation – planet-wide – remains systematically prohibited within the political system and the mainstream media. Anyone arguing that “chemtrails” are a reality is ridiculed and rejected as a “conspiracy theorist”.

(See here the report of the Cyprus Greens on the spraying.)

In 2012 Mr. George Perdikis gave an interview in Athens on the spraying.

Seven parliamentarians in Greece from almost all parties have asked questions in Parliament about the clandestine spraying. (for subtitles click rectangle on right under the picture)

Aegina occupies a distinguished position in the history of citizen reaction against these spraying programmes conducted behind the back of the public. In 2003 it emerged as the first municipality in Europe to attempt to take action for investigation of the subject. There is a relevant video online with the present (June 2014) deputy mayor of Aegina Nektarios Koukoulis.

Here are some photographs from George Perdikis’ June 2014 visit to Aegina.