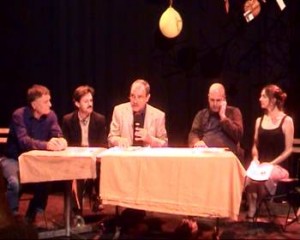 Because I have only a few minutes to say what I have to say I would like to point out that I see the discussion of directed energy weapons as a discussion with the potential to strengthen the anti-nuclear movement generally. Some terrible accusations are being made about the role of directed energy weapons in the disaster that has occurred in Japan and is now irradiating the entire planet. If it turns out that the Fukushima disaster is the result of a deliberate criminal action, this should greatly mobilize both the anti-nuclear movement and society as a whole. Or at least that is my hypothesis. Perhaps some may wish to dispute it. If it turns out merely that criminal actions of this kind have occurred on other recent occasions and could therefore now occur at any moment, and anywhere, that too is surely something which the anti-nuclear movement should not ignore.

It is twenty-five years now since directed energy weapons were a subject that was discussed in the anti-nuclear movement as a whole. The discussion of the Star Wars Programme, also known as the Strategic Defense Initiative, during the presidency of Ronald Reagan, focused the attention of all of the anti-nuclear movement. The conclusion was reached that the Star Wars proposals were unacceptably expensive and extremely unlikely to be technologically feasible, if their purpose was to shoot down ballistic missiles. Some Soviet commentators at that time raised the question of whether the Star Wars programme might really have been conceived to serve some other purpose, given that it was so impracticable and implausible as an anti-missile programme.

With the failure of Ronald Reagan at Reykjavik to secure Soviet consent to the Strategic Defense Initiative, even in exchange for a bizarre and apparently contradictory agreement to carry out universal nuclear disarmament, the subject faded from the headlines and from the consciousness of the anti-nuclear movements. The subject of a ground-based directed energy weapons system known as HAARP, (High Altitude Active Auroral Research Programme) was included in a remarkable 1999 report to the European Parliament “On the Environment, Security and Foreign Policy”, compiled under the direction of the Swedish anti-nuclear activist Maj Britt Theorin, but it was not noticed by the anti-nuclear movements and it was not accepted by the European Commission, who said that such subjects were the business of NATO and not of the European Commission. This Commission decision is, by the way, in itself a confirmation of HAARP’s being a weapons system and not merely a research programme as claimed by the American government.

The book “The Shock Doctrine” by Naomi Klein brought to the consciousness of the world the fact that natural disasters, or disasters claimed to be natural, can bring enticing new prospects for corporate profit and make possible political changes for the benefit of international corporations. Although Naomi Klein did not go so far as to make specific allegations of deliberate disaster production there were others who did. The young American researcher Dutchsinse, who has been monitoring the operations of HAARP, has not only made such allegations but has on the basis of this monitoring accurately predicted what are represented as natural disasters, such as the terrible tornado that destroyed Joplin Missouri on 22nd May. The American scientist Leuren Moret described the Fukushima disaster as “tectonic nuclear warfare”. Her claim is disputed by other researchers, such as Major Doug Rokke, who has collaborated with Leuren Moret in campaigning against depleted uranium. Rokke says that the epicenter of the March 11 earthquake came from too deep in the earth to have been caused by a weapon. But what is most unacceptable about this discussion, and other discussions like it, is that they are taking place in a world of their own, in a ghetto, in a milieu that is stigmatized by the international media and the political mainstream as the world of “conspiracy theory”.

The discussions on directed energy weapons that in the 1980s Star Wars discussions were part of mainstream political debate are today the speciality of a section of society called the “conspiracy theorists” and specifically the “chemtrails” activists, who have been trying for years to gain recognition for acceptance of the reality of a global campaign of aerosol spraying from aircraft, to serve a variety of purposes from reduction of levels of sunlight to counteract global warming to increasing the electrical conductivity of the atmosphere, precisely so as to facilitate the functioning of directed energy weapons. (This is to leave out of account a number of other accusations that are also being made in relation to chemtrails).

What has been constructed is a very effective “divide and rule” scenario. On the one hand the anti-nuclear movements ignore the discussions of the “conspiracy theorists” over whether today’s successive “natural” disasters are being generated deliberately. On the other hand the “conspiracy” theorists become increasingly preoccupied with the subject of whether the “natural” disasters are being caused by the Americans, the Chinese, the Russians, the Europeans, or whoever. This preoccupation is reinforced by interventions by the likes of the Russian nationalist Zhirinovsky, who claims on Russian television that the Russians possess “secret weather weapons” that can destroy any part of the planet and “kill millions of people”.

Fortunately there are some who have managed to escape from the “divide-and-rule” scenario. The Greens of Cyprus, who are members of the European Greens and have representation in the parliament of Cyprus, campaign actively and at the leadership level both against both HAARP, which they believe also operates from Cyprus, and against chemtrails. They are an outstanding exception among the Green parties of Europe and indeed of the world, and their example should be followed by the other Green parties..

Meanwhile, in civil society, and in the anti-nuclear movements, the movements for pan-European nuclear disarmament, the movement for a Europe free of nuclear weapons and nuclear power stations that was so powerful prior to the collapse of the Soviet Union should be reactivated. The denuclearization of our region cannot be held hostage to global developments and to the divide-and-rule scenarios of American politics. The Saintes Appeal for a Nuclear Free Europe should be supported by everybody. The 1999 report to the European Parliament “On the Environment, Security and Foreign Policy” should become the basis of a new European anti-nuclear movement, and indeed of a new citizens’ Europe .