NUCLEAR WEAPONS FOR THE UNDERDOG

In an article last February in the English-language German newspaper “The German Times”, Christopher Bertram, former head of the German Institute for International and Security Affairs, said that the United States could carry out nuclear disarmament unilaterally without seriously undermining its own security. “However,” he then asked, “will others not aspire to the bomb precisely in order to protect themselves against American superiority? And will the other nuclear weapons states that have invested so much to attain that status be willing to lose it again?”

This is a post-Cold-War justification for nuclear weapons: nuclear weapons for the underdog. It is an unpleasant reminder of what has been lost with the disappearance from the scene of the state-sponsored mass peace movements of the Communist era. During the Cold War no West German spokesperson would ever have thought of trying to defend the alleged deterrent capacities of Soviet nuclear weapons. He would simply have argued about the hypocrisy of the anti-nuclear rhetoric of the official Communist-front peace movements, contrasting it to the actual pro-nuclear actions of Communist governments.

Supporting the nuclear weapons of the underdog presupposes an unquestioning acceptance of the doctrine of nuclear deterrence. During the Cold War this doctrine was much more disputed than it is today. It was disputed within NATO by American politicians and military spokespersons trying to make European governments increase conventional defense expenditure. It was disputed by the peace movements, particularly after the coming onto the anti-nuclear scene of the Swedes, following Sweden’s unilateral nuclear disarmament of the late 1960s. The argument was that the possession of a nuclear arsenal merely served to turn a country into a target for the nuclear weapons of other states.

Nowadays, when almost every new war is justified in terms of the target country wanting to obtain nuclear weapons, this particularly anti-nuclear argument that the Swedish military succeeded in imposing on the country’s Social Democratic and pro-nuclear political leadership, is paradoxically never heard. Instead of that one hears how militarily weak states are inevitably going to try to obtain nuclear weapons because they have no other effective means for defending themselves.

If one is to speak of underdogs, the Soviet underdog possessed the world’s second largest nuclear arsenal, which at its height contained around 30,000 tactical and strategic nuclear weapons. This immense arsenal was absolutely incapable of averting the present situation in those lands, where vast swathes of the territories of the former Soviet Union are under direct American military occupation. Not only was the Soviet Union’s nuclear arsenal patently useless for defending the Soviet state. When compared with the way that non- nuclear-weapons states such as Cuba have so far succeeded in surviving as Communist states without any of the benefits of the alleged nuclear deterrence, there appear to be very good ground for believing that the Soviet nuclear arsenal was more than useless and was in fact the key element of Soviet vulnerability. Its existence facilitated that two-stage counterforce “limited nuclear war” scenario that NATO implemented in the 1980s and that finally brought about Soviet capitulation.

During the period of collapse of the Soviet Union, doctrines of nuclear deterrence were deeply discredited amongst the former Communist rulers, who understood that their nuclear weapons were not going to save them. Boris Yeltsin was willing to go even further than Mikhail Gorbachev in divesting the Soviet Union of its nuclear weapons. Following the hardliners’ coup of August 1991 he proposed in the Russian Duma a 95% unilateral Soviet nuclear disarmament1. At this time the Western anti-nuclear movements were in a curious state of eclipse, not visibly either monitoring developments or making proposals. Yeltsin’s attempts to achieve Soviet nuclear disarmament passed almost unnoticed, to our disgrace, because the non-aligned anti-nuclear movements and much of the Western extra-parliamentary Left had previously played a role in supporting Yeltsin in the period when he was rising politically. We were not there to help him achieve what was probably the only positive element he had in his programme: Soviet nuclear disarmament.

The situation that arose in the context of the Soviet collapse enabled the Western anti-nuclear movements to go onto the offensive in a way that had never before been possible. In Great Britain, one of the favourite jests of the Tory opponents of the Campaign for Nuclear Disarmament had been to say that CND should propose unilateral nuclear disarmament to the Soviets. Precisely that is what CND could have done, and should have been doing in response to the August 1991 coup against Gorbachev. How could the political right wing have mounted any resistance to such a demand? It would not have been possible for ANYBODY in August 1991 to have spoken in favour of the underdog’s right to nuclear weapons, as Christopher Bertram does now in 2008, at the end of seventeen years of gradual, stealthy reintroduction not only of unchallenged doctrines of nuclear deterrence but also of fraudulent respectability of nuclear power stations.

In the closing months of 1991 CND’s policy was merely to say that there was no longer an enemy for British nuclear weapons to target. This was like an invitation for new enemies to be found, as they have been found.

Here we touch on more or less the only point on which I would disagree with Mikael Böök. Mikael says that following the collapse of the USSR “Europe became the undivided and relatively pacific continent that E.P. Thompson and the END activists had only been able to dream of”. This gives a misleading impression of the mood that prevailed in the anti-nuclear movement in the late eighties and early nineties. At the end of his life Edward Thompson was deeply depressed both at the outbreak of the wars in Yugoslavia and at the fact that while the Warsaw Pact had dissolved NATO had not. He saw this almost as a refutation of the policies that he and END had pursued throughout the 1980s, even as a sign of failure.

Although the 1990s did see some anti-nuclear successes, such as the cessation of nuclear testing, the record has mostly been of further failure. When in 1996 India refused to sign the Comprehensive Test Ban Treaty, the anti-nuclear movements virtually unanimously took sides with the nuclear underdog, supporting India’s charges against the United States that it was violating Article VI of the Nuclear Non-Proliferation Treaty. This provision obliges the nuclear weapons states to pursue “negotiations in good faith on effective measures relating to cessation of the nuclear arms race at an early date and to nuclear disarmament.” India’s stance was that the United States’ violation of the Non-Proliferation Treaty disqualified it from demanding Indian adhesion to the Comprehensive Test Ban Treaty. The anti-nuclear movement’s support for India at this time greatly complicated the tasks of the Pakistani government of Benazhir Bhutto, who was defying vociferous Islamist opposition in order to express willingness to sign the CTBT despite India’s refusal to do the same. Bhutto’s government fell soon after India’s successful defiance of the United States. The nuclear testing treaty, with all its implications for relations between Pakistan and India, was one of the issues that brought it down.

In recent years the anti-nuclear movements have been campaigning against NATO’s plans for installing the Anti-Missile Shield systems in Central Europe. The campaign has so far failed. At the NATO Summit in Bucharest the European NATO countries voted to support the United States in its intentions to proceed with the Anti-Missile Shield. Again, as in 1996 with the Indians, the anti-nuclear movements have been opting for support of the nuclear-armed underdog. CND president Kate Hudson has said that NATO’s Anti-Missile Shield would give the USA the ability “to strike without fear of retaliation”. Opposition to the anti-missile shield is thus presented in terms of defending Russian nuclear deterrence.

Now there are certain things to be said about Russian nuclear weapons, but the main thing to be said is that we really know very little about them. We know very little about the extent to which the Russian military, and the Russian President, really control the Russian nuclear arsenal. Gorbachev himself is said to have refused to “press the nuclear button”, or have anything to do with it, even for the purpose of military exercises. Vladimir Putin might have chosen in the past to use the image of heading a “nuclear power” to look tough and win presidential elections, using the same formula that has been so successful for Western pro-nuclear politicians. But how much substance is behind it? In late 1991 I noted a press report of Krioutchkov, the last head of the KGB, saying at his trial that the hardliners’ coup against Gorbachev was largely motivated by fears that the Soviet nuclear arsenal was coming under the control of the United States. I cannot confirm that report through present-day Internet investigation. Is it true? What has happened in the meantime? When Putin was making his moves to displace Yeltsin what deals did he make with the “foreign factor” on the subject of nuclear weapons? We don’t know the answers to ANY of these questions. We should try to enlist the aid of past collaborators in END such as Tair Tairov to help us try to find some of the answers.
In the meantime, let us endeavour to get away from the habit of supporting the post Cold-War ideology of the underdog’s right, or inevitable desire, to secure a “nuclear deterrent”.

One the best ways of doing this, as Mikael Book is arguing and I am supporting, is through revival of the project of European Nuclear Disarmament. 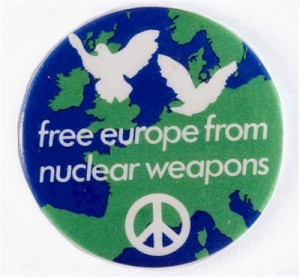 END was the key British voice of the “non-aligned” anti-nuclear movement in the 1980s.
END grew out of the European Nuclear Disarmament initiative, launched in London in April 1980. The text of the Appeal for European Nuclear Disarmament declares that: “We must act together to free the entire territory of Europe, from Poland to Portugal, from nuclear weapons, air and submarine bases and from all institutions engaged in research into or manufacture of nuclear weapons. We need to mount an irresistible pressure for a Europe free of nuclear weapons.”