There was a good turnout for the day conference on “Chemtrails – geoengineering – HAARP – climate modification – consequences for health and the environment” held at Kiato in Corinthia prefecture.

The day conference was held in the amphitheatre of the Municipality of Sikyonia at Kiato on the initiative of the Kiato Group against Aerial Spraying. The speakers were:

A. Giannoulopoulos: Cardiologist, pulmonologist, Representative of EPAN (Academic Reform): “The consequences of chemtrails for human health and other toxic element in the environment and in food”

Following the speakers’ presentations there was interactive discussion, with a seriously concerned audience seeking answers to the phenomenon more and more people see growing before their eyes.

A large proportion of the local population has been informed, is searching for answers on the internet and is informing their fellow citizens.

Informational leaflets were distributed, along with audio-visual CDs for those not readily able to access the internet.

We applaud this very significant initiative and hope for similar day conferences to be organized in other towns and cities. 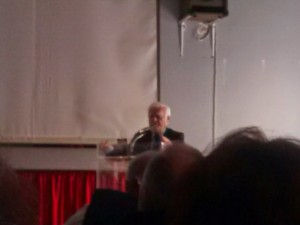