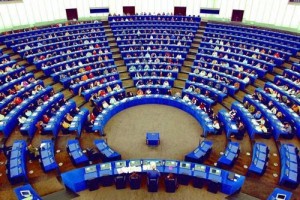 On 25th March 2014, national day of commemoration of the outbreak of the Greek Revolution of 1821, a pleasant surprise came to us from Brussels: acceptance by the European Parliament of the petition on aerial spraying and HAARP submitted a year ago by the Skyguards group following the two-day conference “Beyond Theories of Weather Modification – Civil Society against Geoengineering” that was held there at that time.

The President of the Petitions Committee Erminia Mazzoni wrote to us: “I would like to inform you that the Committee on Petitions considered your petition and decided that the issues which you raise are admissible in accordance with the Rules of Procedure of the European Parliament, insofar as the subject matter falls within the sphere of activities of the European Union.

I think it would be appropriate for activists, active citizens and voters to draw the attention of candidates for election to the European Parliament to the Open Letter drawn up by the Skyguards group, and above all the candidates of the party of Mr. Stavros Theodorakis, who has distinguished himself in ridicule not only of activists but also of parliamentarians and scientists who have dared to do anything other than reproduce the uninformed “humour” and slander which Mr. Theodorakis evidently finds satisfying.

What was said and asked on last year’s television programme by Mr. Theodorakis: “Are they spraying us?”

If Mr. Theodorakis manages to achieve representation in the European Parliament, we look forward with interest to the relevant depositions that will be made to the European Commission by his followers. Or perhaps they will try to avoid the subject.

We are not going to allow them to do that.

Just as an afterthought, “Are they spraying us” was screened by the mass-circulation MEGA channel, Mr. Theodorakis’ employer, which also clearly supports his excursion into politics. (If you wish to see the full version of this terrible programme, press here, unfortunately with out-of-synch English subtitles towards the end).

MEGA has just been arraigned by the Greek Radio and Television Council for a news bulletin aired on 12th October 2013, just after the arrests of the neo-Nazi Golden Dawn leadership, during which MEGA put forward a condemnation of “the two extremes”, demanding that the Leftist SYRIZA party condemn violence “wherever it comes from”. Specifically the demand was for SYRIZA to condemn the mass anti-austerity demonstrations of 2010 in the course of which three employees lost their lives in a fire, started by arsonists, at the Marfin Egnatia Bank in Athens.

The indictment of MEGA was launched by private individuals who said that they regarded “manipulative tactics of that kind” as “unacceptable”: “we ask that you examine to what extent they are consistent with the sound practice of objective news reporting.”

Stavros Theodorakis’ politics are also, in their way, a politics of condemnation of “the two extremes”, those extremes being left-wing and right-wing “populism”. They fit in well with what has been called the dominant global politics of “the extremist centre”. And in today’s situation of generalized disorientation and desperation in Greece, they are a politics that appeals to the disillusioned and gullible audiences of MEGA and a handful of other such channels. But they contain a reality deficit, and the European Parliament has perhaps now provided an opportunity for that to be made evident to even to the most naïve.

See the discussion of Theodorakis’ “Are they Spraying Us” with former European parliamentarian Giulietto Chiesa, director of the 911 Truth movement film “Zero”.

Dear candidates for representation of European citizens from 2014 to 2019. You are seeking election to defend our interests and fundamental rights at the highest level of democratic European administration: the European Parliament.

We represent thousands of citizens in dozens of associations in the European Union. Unfortunately we also form part of that large percentage of citizens who have lost faith in European institutions and in our political representatives. We believe that for the most part they serve corporations and other political interests detrimental to citizens. Although in the past we may have voted with some measure of hope, today, being deceived, we are not ready to sign blank cheques. Therefore we want to know what you are willing to do for European citizens on a very serious subject: climate manipulation, an accomplished fact, exposed by our associations in the European Parliament last year.

An example of institutional indifference and disdain for citizens

On 8th and 9th April 2013, organizations from 17 countries in the European Union exposed to the European Parliament, in a conference patronized by MEP Mrs. Tatjana Zdanoka, their concerns about clandestine aerial spraying of the European sky in the context of illegal ongoing climate manipulation / geoengineering programs, as a follow up to the Resolution of the European Parliament on “Environment, Security and Foreign Policy”, approved on 14th January 1999, on the basis of Report A4-005/99 by the Committee on Foreign Affairs, Security and Defense Policy.

In its point T and paragraph on “HAARP –A military weapon system with devastating effects on climate”, the Report made it explicit that:

‘despite the existing conventions military research is in progress on environmental manipulation as a weapon, as demonstrated for example by the Alaska-based HAARP system. Defined as a weapons system which disrupts the climate, outside of any legal framework, HAARP is a matter of global concern and has to be regarded as a serious threat to the environment, with an incalculable impact on human life’.

Our conference was entitled “Beyond theories of climate modification – civil society vs geoengineering”. All members of parliament from all political groups were invited to attend but in spite of the subject’s importance NONE did so. No representatives from the media came to the press conference after the event either.

Following the conference, a petition was presented to the Committee on Petitions of the European Parliament, demanding an independent investigation of facts – concerning environmental matters and consumer protection -, taking place without the knowledge and consent of citizens and in total defiance of the precautionary principle, which violate fundamental rights of European citizens as set out in the Treaties, such as the right to health, the right to security, and the right to integrity, as well as the right to be informed. This petition also concerns environmental matters and consumer protection. We have just been informed that this petition HAS BEEN ADMITTED. (See attached document & www.skyguards.org)

Civil society is content about this decision of the European Parliament that gives hope. However the upcoming elections raise questions which would need to be cleared before May 25th. In this perspective and considering that this serious matter also attacks, unconstitutionally, national sovereignty, in special food sovereignty, we want to know if you, the candidates of 2014, are willing to (1) back up the Committee on Petitions on its decision to investigate the facts denounced (2) promote a public debate on the subject (3) legislate to ban all geoengineering and climate manipulation activities in Europe which means that each nation must maintain sovereignty over its sky; (4) legislate in order that the military research programs be submitted to democratic and parliamentary control; and (5) demand full implementation of the European Parliament Resolution on “Environment, Security and Foreign Policy”, above mentioned. – Hoping to receive soon your answer.